More than seven million retirees live in poverty and tens of millions more are just scraping by because of mistakes in 401k investing. It's a national tragedy and few are talking about a solution.

Making sure you don't fall into this trap means understanding how to invest your 401K and avoiding the biggest mistakes.

By the end of this video, you’ll know the five worst 401K mistakes and how to avoid them. In fact, I’m going to show you how avoiding just one of these mistakes can lead to big savings in your nest egg.

The Retirement Savings Crisis in America

Fidelity has released its annual survey of retirement account balances and it’s not a pretty picture. The average person just before retirement has about $167,000 in their 401K account. That’s about five-times the annual salary of around $35,000 and not nearly enough to retire on.

If you go by the rule of thumb that you can take out about 4% of your investments to pay for expenses in retirement, that $167K means retiring on just $6,700 a year and that’s before taxes.

It’s easy to see why two-in-three retirees depend on social security for most of their expenses but even added the average $1,360 monthly SSI check means you’re living on just over $1,900 a month or about $23,000 a year.

Now I don’t know what state you live in but you compare that with your expenses and I don’t know anyone that can live on $23,000 a year. Even for married couples with two SSI checks, it comes out under $3,000 a month.

These were supposed to be the golden years, the years you worked your whole life to enjoy. You’re enjoying them alright, if you enjoy ramen noodles and bus passes.

It doesn’t have to be like this! We all think that people don’t save or invest enough but a big part of the problem is the mistakes they make when they do invest.

Investing just $250 a month starting at age 35 can grow to over $350,000 by the time you retire if you keep your fees and costs low. Invest that same amount but lose 4% of it to fees and all the hidden costs that come with 401K plans and you’re stuck right back in that studio apartment eating ramen.

Of course, the beauty of that 401K plan is your employer match. If your company matches just half that $3,000 a year and you avoid those high fees and other costs, that nest egg can grow to over half a million by age 67.

That’s enough for an income of $3,100 with SSI for a single person or almost $4,500 for a married couple. It might not be filet mignon but it’s a nice little start.

The key here is to avoid those huge fees, mistakes and pitfalls in those 401K plans and that’s exactly what we’re going to talk about in today’s video. Not only will I reveal the five worst mistakes people make with their 401K investing, I’ll share three tips to avoid these pitfalls and a way to get a free 401K analysis to save you from those hidden fees.

It’s all part of a three-part video series in partnership with Blooom.

Blooom is an independent 401k manager that works with your existing retirement account. You can connect your 401K account and Blooom’s software will show you the investment fees you’re paying, and how to get back on track.

I’ll review Blooom later and share a special offer to get your free 401K health analysis but first let’s get to those five 401K mistakes.

Investing Your 401K with Too Much Risk

First here is being too aggressive or too conservative with your 401K investments.

With retirement balances what they are, it’s easy to chase those returns in stocks even all the way to retirement. The problem is, and you can ask anyone that was planning to retire in 2008, that as you get closer to retirement, you need to start thinking about protecting your money as much as growing it. 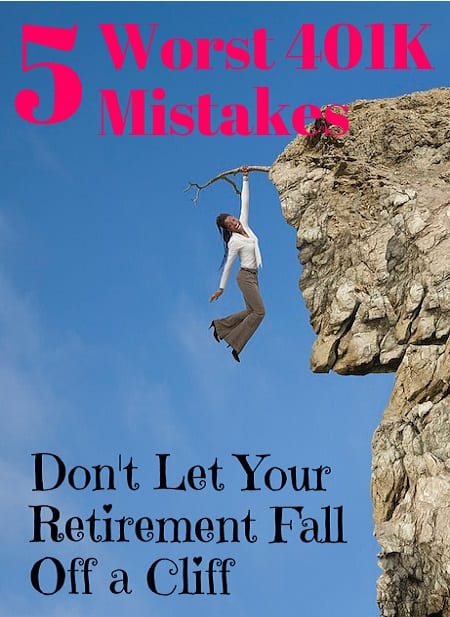 Having too much in stocks is just setting you up for a stock market crash to wipe out half your nest egg.

Being too conservative is also a big problem though, especially for millennials still gun-shy after the 2008 crash. If we look back on that investment of $250 a month but only earn a 6% annual return from too much in bonds then even the best case scenario yields just $237,000 by retirement.

The Problem with Target Date Funds

The second mistake a lot of people make with their 401K investments is putting everything in a Target Date fund. Now these are popular because supposedly, they invest according to your age and rebalance with stocks and bonds as you get older.

The problem here is these things are so darn expensive. For example, the Principal LifeTime 2040 fund charges 1.14% annually. That’s almost five-times the average index fund.

Another problem with these target date funds is they tend to be wildly over-conservative. Some funds I looked at have more than 20% of the investments in bonds for investors with 20+ years to retirement and that’s going to seriously limit returns.

Our third major 401K mistake is just forgetting to rebalance the investments in your account. This is important because you might start with a great mix of stocks and bonds in your 30s but if you’re not rebalancing and shifting how much you want in each, you could be way off by the time you reach retirement. You’re going to be more exposed to a stock market crash and the amount you have in stocks versus bonds will be way off from what you need.

In fact, a survey of 5,500 Blooom clients found that 59% didn’t regularly rebalance their investments and 21% didn’t even know about rebalancing before they started using Blooom.

The fourth 401K mistake, and this is probably the worst, is not watching those fees. Inc magazine found that 92% of Americans don’t know what fees they’re paying in their 401K accounts. That same survey by Blooom found that just one-in-five investors were active in minimizing their fees.

We know what a huge difference just a small change in fees can mean to your retirement savings. Forbes found in one study that a difference of just 0.93%, less than 1%, in fees can cost a single investor up to $215,000. Considering the average Blooom client in a target date fund sees their fees reduced by 42%, that can mean a big change in your retirement.

Our fifth 401K mistake before we get to those three tips is one of the biggest 401K misconceptions of all, that someone is managing your account.

Just because you invest through your company’s plan and with an investment company, doesn’t mean anyone is managing your 401K investments. The investment company is busy selling to new clients, they may not be doing anything with your account.

You set your 401K investments when you sign up to the plan and they don’t change unless you change them. That’s going to set you up for all the pitfalls we talked about in this video.

How to Avoid the Worst 401K Mistakes

As bad as these 401K mistakes are, there are a few things you can do to avoid them and make sure your money is there when you need it.

First, understand how your investments should change as you age. There are rules of thumb like 100 minus your age for the amount you want in stocks but these leave a lot of risk to your personal goals. As you get older, your needs shift to protecting your money rather than chasing those high returns so you need to be proactive in shifting your investments.

You also need to rebalance your investments regularly. This isn’t about timing the stock market but about staying on track according to your needs. If you’re constantly investing the same amount in stocks and bonds, the stock-portion of your portfolio is going to grow much faster during a bull market. That means it’s going to get out of whack with that perfect mix you need according to your goals.

Finally here is just to watch those fees. Make sure your 401K plan isn’t charging you load fees to buy or sell and compare the annual fees on your funds. Some of the easiest solutions like those target date funds charge the highest fees.

This last tip is where Blooom really shines and it’s shown people how to save over $608 million in investment fees on their 401K accounts. They also take care of all the rebalancing and management as well.

How to Check Your 401K Portfolio

The best way to make sure you’re not making these 401K mistakes is to get that free analysis with Blooom. It takes less than two minutes to connect with your 401K plan and Blooom will do a complete health checkup on your retirement account. It’s going to show you where your investments are, where they should be and all the fees you’re paying.

There’s no obligation to the analysis. If you don’t know exactly what’s going on inside your 401K account, click through that link and find out exactly which of these mistakes you’re making in your 401K. I’ll leave a link in the video description below.

Don’t forget to also be watching for the next video in our 401K investing series. Next week, I’ll be answering your questions about 401K and retirement investing so make sure you ask those in the comments below. We’ll also take a closer look at the average 401K balance by age and how to get yours back on track.