The Brexit vote is this week and could affect stock markets globally. Use these strategies to protect your stocks if the U.K. leaves the European Union


Strong economic reports last week should have taken U.S. stocks higher but the stock market booked one of its worst weeks of the year on fears over the Brexit vote. Recent polls point to the United Kingdom leaving the European Union and investors are anxious about Friday’s vote.

Normally I would say just don’t worry about these short-term headline risks to your portfolio. Keep to your personal investment plan and don’t get caught up in the market jitters. Even a yes vote on the Brexit may not mean much for the U.S. economy over the next few years.

But the media pundits are having a field day pushing the story and investor fear is building. That makes for the potential for some bad investor behaviors and I thought I would help to tell the story without all the hype.

In case you’re wondering, I’m not doing anything differently with my portfolio for the same reason why I don’t worry about a stock market crash.

Let’s look at what Brexit entails and how it could affect the stock market before examining a few ways to protect your investments against a breakup of the European Union.

The European Union has always been a shaky deal since formed in 1993 and several countries have considered leaving since the 2008 global crisis. Each country in the Union has its own government and military but shares a currency, central bank and many government policies. The idea has been that free trade and common economic strength can better compete on the international stage.

The EU has had some successes but has also had a lot of problems, especially between the differences between the Northern countries which tend to be more fiscally conservative versus the Southern and Eastern countries which fall closer to the socialist economic model (not that they are as far left as many Latin American countries, but much further left compared to Germany).

Great Britain has always felt the step-sibling to the Union and maintained its own currency. The country is in far better shape economically than many other countries and Britons feel they are being made to pay an unfair share to the EU without getting much in return. Terrorism and the anti-immigration camp have used last years’ refugee crisis from Syria as a hotspot as well.

The country scheduled a vote to leave the EU and just months ago it didn’t look like the Brexit side had a snowball’s chance. That’s changed in the last couple of weeks and recent Brexit polls point to a ‘leave’ vote when voting occurs this Friday. 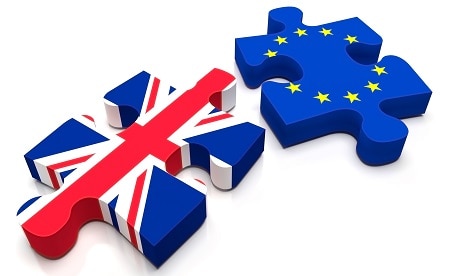 So you’re probably wondering what Brexit has to do with you and your U.S. stocks. If you’ve been following the stock market over the last week, you might get the impression that Britain leaving the E.U. could be very bad for stocks.

The S&P 500 has fallen 2.3% since June 8th with nearly every day booking losses. Prices for Treasury Bonds have jumped as investors look for safety against the possibility of a Brexit causing some kind of stock market crash.

The fear is that a Brexit will cause some kind of disruption in the already very weak global economy. Global trade is expected to grow just 2.8% this year, about half the rate as before the global financial crisis and the worst five-year period since the mid-80s. Union countries represent seven of Britain’s top 10 trade partners. If Brexit gets the yay vote, the country would have to renegotiate trade deals with the E.U. and everyone with which the Union has a trade deal, including the United States. This could take a while and trade would certainly fall off for at least the rest of the year.

London’s place as a financial capital would also be weakened and many companies headquartered in the U.K. with business in the European Union could see sales crash as they figure out how to work in the new landscape.

Most international economic organizations as well as many leaders, including President Obama, have come out against Brexit on the economic consequences it could bring. Jamie Dimon of JP Morgan called it one of the biggest risks of 2016 earlier this year.

Against the potential for a Brexit and the hit to the global economy, there are reasons to believe it won’t send global stock markets into a full-blown crash. Central banks in the U.K. and the E.U. would be ready with monetary stimulus and the U.S. Federal Reserve used the Brexit as an excuse to hold off on raising rates last week.

Despite the weak jobs report last month, partially due to striking Verizon workers, the U.S. economy is fairly strong and can withstand a Brexit. Core consumer spending was reported last week at 4.3% growth over the last year, not super-fast but still positive and especially important considering consumers account for two-thirds of the economy. Loan rates continue to hover around record lows which supports corporate spending and stock market prices.

How to Protect your Stocks from a Brexit

For something that probably doesn’t matter a great deal to your investment plan and long-term investing strategy, I sure took a long time to explain Brexit. Sorry, it’s a complicated situation and there’s been a ton of media coverage. I wanted you to have an honest idea of what is going on without all the media hype from pundits and Wall Street analysts. 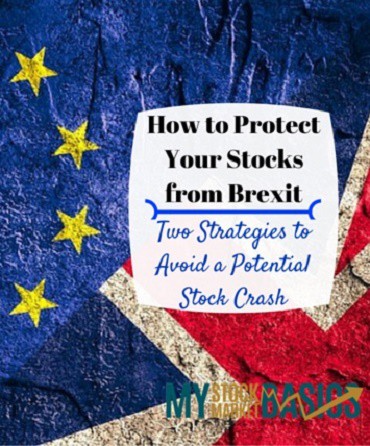 If Britons do vote for the Brexit on Friday, it’s likely the stock market will drop and could fall throughout the summer. The summer is historically a weak time for stocks anyway so traders will use any excuse to take profits and go on vacation.

The global economy should remain on a positive path and the U.S. economy will do just fine. A Brexit vote will put off an interest rate hike by the Federal Reserve and that should help to support stock prices.

The problem with trying to protect yourself from the short-term consequences of a Brexit vote on stocks is that protection always comes at a cost. If you’ve truly got a long-term investment outlook then a small stock market correction this summer shouldn’t matter much and you’re better off not paying the price for protection.

If you have a shorter-term outlook or need for your investments then you might want to consider protecting your stock portfolio.

We talked about using options strategies for stock market protection in an earlier post. Stock options aren’t just for traders or people looking for big gains, they can also be used to reduce risk around your investments.

One options strategy called the protective put can limit your downside risk while still allowing you to gain from higher stock prices. You buy put options against one of your stocks or against the market itself. A put option gives you the right to sell the stock for a certain price in the future. If the stock price falls, you still have the right to sell it at the option price. Effectively, the put option limits your downside risk to a specific price.

For example, if I were worried that a Brexit could send the stock market lower, I could buy put options on the SPDR S&P 500 ETF (SPY) which follows the market index. The fund trades for $206.52 per share and I can buy September put options that allow me to sell at $206 per share for a premium of $7.10 each. That premium is the price you pay for protecting your investments.

Of course, if Brexit does not happen or the stock market holds up then I lose the $7.10 I paid for the put options. It can get expensive protecting against every headline risk you see in the stock market so I usually only partially protect my portfolio by buying a small amount of options. The upside is that my loss is limited to what I paid for the options and I still benefit from rising prices on my other stocks.

If you’re looking for more education on options or how to trade options for protection, the Optionshouse platform offers excellent investor resources and low-price fees on options trading. Fees are just $4.95 per trade and $0.50 per option, well under fees at other platforms that don’t specialize in options investing.

Open a new Optionshouse account and trade free for 60 days.

Another way to protect your stocks from a Brexit would be to buy shares of the PowerShares DB US Dollar Bullish ETF (UUP) which tracks the value of the greenback. The British Pound and Euro would both weaken if Britain votes to leave the Union and the uncertainty around the global economy would drive money into the dollar for safety. If Brexit gets a no vote, the dollar could drop a little but there are still a lot of factors pointing to USD strength for the rest of the year so your downside should be limited in the fund.

Wow, I had planned on this being just a short note and it ballooned into quite a bit more. Maybe it’s only interesting to us economists and investment analysts, sorry. The actual effect of a Brexit on stocks should be limited over the long-term so you’re perfectly fine doing nothing and keeping to your investment plan. Resist the urge to freak out and sell investments when things look bad. Use the investing strategies above to protect your stocks from a Brexit if you are worried about short-term losses.