Long-term themes are one of my favorite ways to invest and find the best investments for the next several decades. These investing themes have huge forces behind them and will lift entire sectors and industries in the economy. Besides the upside potential from these long-term investing themes, they also fit with two very important stock market basics that can help you reach your investing goals.

First, you don’t have to constantly pick the best stocks for your portfolio. Once you find a long-term theme in which to invest, you buy the best investments within the industry or the entire sector itself through a fund. These long-term investing themes play out over decades so you really don’t have to worry about what happens to the stock market in any given year.

Investing on long-term themes is also a great way to avoid the fees and trading costs that come with other investing strategies. You might buy more of your stocks each year or every few quarters but you’re not trading in and out constantly.

called the American Future Fund. The fund holds five exchange traded funds (ETFs) and ten stocks within the three themes, giving me exposure to hundreds of companies within the investing themes. Since they’re all grouped into one fund, I pay just one commission each time I want to buy the group. The fund is doing very well nearly doubled the return on the stock market since it was created, rising 13.6% against a return of 6.9% for the S&P 500 and the factors below may mean it continues to outperform.

Best Investments for an Aging World

Many developed countries are heading toward a demographic crisis where the number of workers may not be able to support pension payments and promises to the older generation. By 2050, nearly half of the Japanese population will be age 65 or older and it’s not much better in Europe. 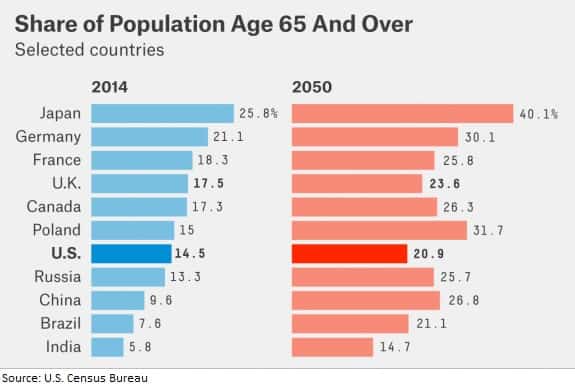 Advances in healthcare mean people are working longer and lead more active lives but the aging demographic will still bring dramatic changes to consumer spending and the economy.

Certain entertainment stocks will also benefit as seniors enjoy their retirement. More than half (52%) of cruise travelers are 50 years or older and 50% of RV owners are 65 or older. The cohort is also active in the home & garden sector, spending on outdoor tools and supplies.

Broad exposure to the healthcare investing theme is pretty easy through the Health Care Select Sector SPDR fund (XLV) which holds shares of 60 companies in pharmaceuticals, biotechnology, healthcare providers and equipment suppliers. HCP Inc (HCP), a real estate investment trust that owns senior living and healthcare properties, is one of my favorite stocks and pays a super-high 6.6% dividend.

On the entertainment side, some of the best stocks can be found in cruise lines and recreational vehicles. I like both Carnival Corporation (CCL) and Winnebago Industries (WGO) as plays on the aging investment theme.

Notice I haven’t highlighted a lot of stock numbers like price-to-earnings or profit margins. These are important when you’re picking individual stocks but maybe not as much as you’d think when investing on long-term themes. You may put down a large initial purchase in these stocks at first but you’ll be buying into the group for years to come.

Whether the stocks are a little expensive now or whether you think you might be able to get a better deal by waiting doesn’t really matter much when you look at the long picture over 30 years. The biggest advantage of these long-term investments is that you don’t have to worry about the stock market or what the investments do in any given year. Set up a fund in Motif or your online investing site to buy the group, make deposits from your savings monthly and invest in the group two or three times each year.

Crop prices have crashed on record harvests and Bloomberg reports that the federal government will pay out $13.9 billion in crop subsidies this year, almost a quarter of total farm income. The current price of corn, around $3.55 per bushel, is less than half the record $8.49 reached just four years ago.

But the oversupply condition could turn quickly and crop prices may jump in the years ahead.

The World Bank is forecasting a massive food shortage over the next 34 years with demand surging 50% as the world tries feeding nine billion hungry mouths. Crop production isn’t growing fast enough to meet the challenge, with annual crop yield increasing about half as much as is needed. Worse still is that the World Bank also estimates that climate change may decrease crop yields by up to 25% over the next three decades.

Two trends will be undeniable as the world tries to meet food demand. Producers will need to use more fertilizers and other chemicals to boost crop yield and protect their fields against pests. This won’t likely be enough and crop prices will head higher over the next few decades.

The drop in crop prices has sent short-term investors running and the agriculture sector is down 16% over the last year with chemicals companies down by more than a third. Investors able to look past the current environment to the long-term investing theme have an opportunity to pick up some of the best investments in agriculture at steep discounts.

The best investments in the long-term agriculture theme are those stocks that help farmers produce and harvest their crops. The Market Vectors Agribusiness fund (MOO) is a good start with exposure to 53 stocks of companies in chemicals, machinery and food. I also like Monsanto (MON), Archer-Daniels-Midland (ADM) and Deere & Co (DE) for a rounded exposure to different points in the supply chain for agriculture. 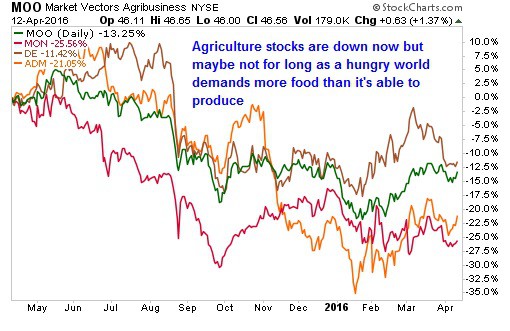 Energy prices have also tumbled over the last year with the price of a barrel of crude about a third of its 2014 high. The boom in U.S. oil production from shale put more oil & gas on the market than was being used and OPEC refuses to cut production to support prices as it’s done in the past.

But any look at a long-term chart of oil prices quickly puts things in perspective. The price of a barrel of crude jumped almost seven-fold over six years to the 2008 peak before tumbling during the financial crisis. Prices tripled in less than two years to 2011 before starting the descent in late 2014. Few markets are as prone to bubbles and bust as oil and oil stocks are firmly in the bust stage right now.

Much of the price increase over the last decade has been on economic growth in emerging markets like China and India, developing their economies and requiring huge resources. While Chinese economic growth has slowed, the world’s two most populous nations are still growing at 6% or more a year. Energy demand is only going higher and the oversupply of oil may be turning very quickly. British Petroleum recently updated its energy outlook through 2035, showing production and demand for oil & gas. 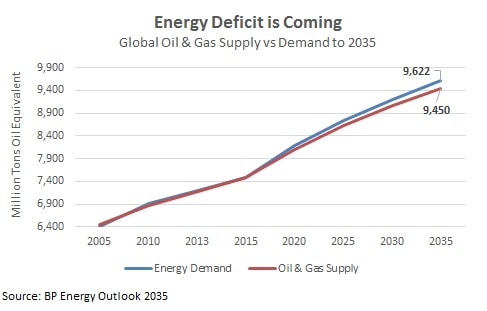 The gap between supply and demand may not seem like much but remember, it’s in millions of tons. The deficit in energy production will begin over the next few years and each year will take some surplus oil out of inventory until we are using 172 million tons more oil & gas than we produce.

The need for energy might be global but there is no better place to find the best investments than in the U.S. energy revolution. Many of the shale drillers may be in trouble now as the price of oil falls below their production costs but they will be the first to profit when prices rebound. The lifting of the 30-year trade restriction on oil exports means U.S. oil producers can now sell crude on the international market, at a price that has typically been several dollars above the West Texas Crude benchmark.

Many companies have also started building out the nation’s infrastructures to liquefy and export natural gas. Natural gas in the U.S. trades for about a third the price in Asia and increasing exports could be big money for the energy industry and for the overall economy. 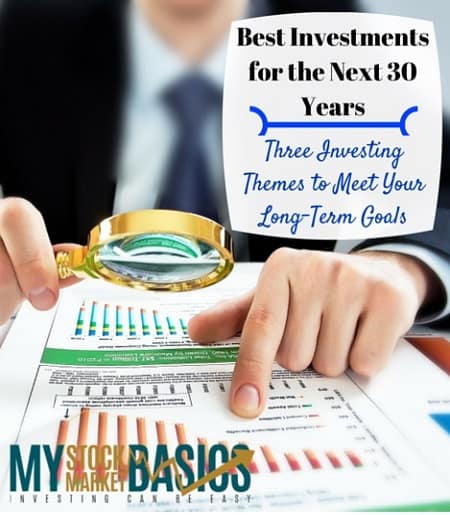 Investing in broad funds will help you keep your sanity if the oil industry continues to feel the pain from low energy prices for a few years. Among my favorite stocks are the Energy Select Sector SPDR fund (XLE) and the SPDR S&P Oil & Gas Explorers and Producers fund (XOP). Between the two, you’ll get up to 100 companies across the two funds, all large American companies in the energy sector. The XLE is more diversified with companies all along the energy supply chain while the XOP gives you more focused exposure to drilling and producers. I like these producer stocks because they have a real advantage coming with exports and they operate in a much more stable environment compared to other oil producers.

One of my favorite oil stocks, also a favorite of Warren Buffett, is Phillips 66 (PSX). The company sees most of its money from refining and gasoline sales, which have helped it withstand the crisis in crude prices, but it is also moving into the transportation and production areas which will help it when oil prices rebound.

Note: While I’ve tried to give you a few ideas of the best stocks within each investing theme, it shouldn’t be taken as an investing recommendation. I own all of the stocks above and think they have great upside over the next several decades but you need to do your own research before picking your own stocks. If you do decide to pick individual stocks, make sure you also invest in the sector funds which will give you broad exposure to hundreds of other companies. This core-satellite investing strategy, putting most of your money in funds and a smaller percentage in individual stocks, is what I call the perfect sleep at night investing strategy.

These are not the only stocks within the three long-term investing themes nor are these the only themes that will get you the best investments over the next several decades. The fact is, you don’t need to find every investing trend to meet your investment goals. Investing in a few strong themes that will provide long-term returns are really all you need. Build a diversified portfolio around a few of the stocks in these themes and around our eight stock market basics to make investing easy and reach your financial goals.