Warren Buffett is loved as the Oracle of Omaha but not all his investments have come out sunshine and lollypops. In fact, Buffett lost nearly $1.7 billion on one stock just recently selling the last of his shares.

I've learned a lot from following Buffett's best investments but it's the warning signs in his worst investment that have saved me thousands over the years.

In this video, I’ll reveal the three warning signs and ways to avoid a bad investment.

We’ve looked at some amazing Warren Buffett investments in our four-part Buffett series on YouTube, from his largest investment to some surprising bets on different industries. To this point, we’ve focused on replicating the Oracle’s almost magical style of stock-picking to be better investors.

But this video, we’ll be looking at one of Buffett’s biggest investment mistakes, a bet that wiped billions from the Berkshire portfolio. We’ll look at what happened and I’ll reveal three warning signs to keep you from making the same mistake.

Don’t forget to click through the Warren Buffett stocks playlist and subscribe so you don't miss a single episode.

By late 2011, International Business Machines (IBM) had rebounded from the financial crash and was hitting all-time highs. The company had transformed itself during the first decade of the century and looked like it was going to be a leader for decades to come.

Buffett had never been a tech investor and was on record many times saying that he knew nothing about the sector, that it changed too fast to give him the confidence in cash flows. But in 2011 he told reporters he thought IBM had a big advantage in finding and keeping clients with, “It’s a big deal for IT departments to move away from using IBM.”

So he liked that continuity and thought it was something like the stable cash flows he got from insurance companies and consumer staples companies.

What Happened with Warren Buffett and IBM?

But then it all turned on him. Buffett completed his final purchase in the first quarter of 2016 with an average price around $173.60 and a total cost of $14.1 billion. According to SEC disclosures, he sold his position through most of 2017 where the stock traded for an average of $153 through the year.

That’s almost a 12% loss which would mean $1.7 billion of that $14 billion total investment. Now fortunately for Buffett and the Berkshire portfolio, the investment collected $29 per share in dividends so he might have come out with about a 5% gain all-told but remember, this was over six years. A total gain of 5% over six years is not something that is going to make you rich.

You’ll hear a lot of “reasons” why the investment failed like Buffett investing outside his core sectors of financials and consumer goods but I don’t buy it. He’s invested outside these sectors before and has a team of analysts in every sector. I think there are three reasons the deal went bad and three signs you can watch for in bad investments.

Why Buffett was Wrong on this Investment

Buffett has always invested in good management and praised former CEOs Gerstner and Palmisano for turning the company around and credited management with a reason he was buying in 2011. One problem here seems that incoming management couldn’t live up to the standards set by past management.

To meet earnings goals, IBM was forced into major cuts that hurt morale and never really took the lead in cloud like it had in traditional IT services.

Management tried to paper over plunging sales with share buybacks and even the Oracle of Omaha fell for it but it couldn’t hide the weakness forever. From 2010 through 2014, the company paid out more in dividends and buybacks than its free cash flow and had to fund all this with $20.6 billion in debt over the eight years through 2017.

In fact, the company was spending so much on buybacks that it forgot what made it a tech leader in the first place. Spending on R&D fell flat and the company wasn’t able to innovate like it always had.

Buffett chased the shares lower, buying more IBM in 2015 even after it had fallen about 35% from its 2013 high.

Warning Signs of a Bad Investment

So what did Buffett do wrong here and how can you keep from making your own monumental investing mistake?

First, if past performance is your reason for investing, you better have a very good reason to believe it will continue. This is especially dangerous around management transitions and you really can’t assume anything.

Sure companies have economic moats in their brand, in market scale and even in good management but you have to honestly ask yourself if it’s a defensible moat and whether things have changed.

Another warning sign here to a bad investment, and I love buybacks and dividends but operational cash flow is king. The first financial statement I ever look at is the Statement of Cash Flows. While everyone else is looking at earnings per share for a company, I’m looking at how much actual cash was generated from the business. 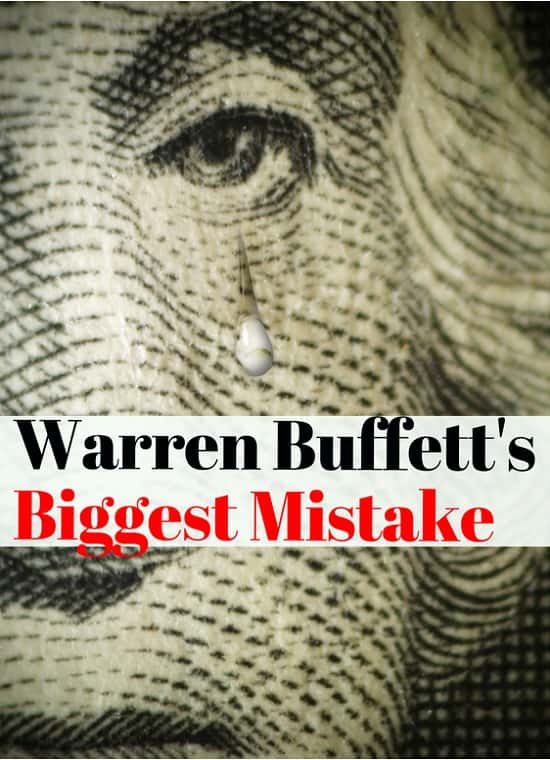 You see management can manipulate earnings by holding off booking some expenses or taking a smaller depreciation expense or moving forward sales that actually won’t be made for months.

All this can distort earnings but it’s much more difficult to do this with actual cash flow. So I’m looking at how much cash the company is generating from operations, how much it’s spending on R&D, how much debt its taking on and the free cash flow.

Finally here is don’t try catching a falling knife. There’s a sad saying in investing that, “If I liked it at $100 then I love it at $90. It means you keep investing more money as the stock price falls.

Some investors will tell you this is called dollar-cost-averaging and that you only need the shares to rebound a little to make money…I call it a fast way to lose your money.

The problem is that one investment can very quickly become a very large part of your portfolio as you keep putting more money in it as the price drops.

Buffett is known for making big investments. Apple is now more than 11% of his Berkshire portfolio but he has an investment committee to hold him back. If you follow a stock down, there’s nothing to keep you from pouring more money after it “just trying to get even”.

Pretty soon, you’re holding shares of a bankrupt company that has taken almost your entire nest egg with it.

You absolutely must have limits on how much you invest in a company and when to cut your losses.

For most investors, I would say never have more than 5% of your stock portfolio in a single company. That means you’re not going to have more than two or three percent of your total wealth in that company since some of your money is in bonds and real estate for diversification.

Losing that two or three percent sucks when a company goes bankrupt but it beats the hell out of telling your spouse that you blew the retirement savings on a bad investment.

Now these three warnings signs are going to help you avoid some of the worst investment mistakes but they’re not the only ones you need to watch for. If you haven’t watched our special playlist on how to get started investing, there are a few videos there where I reveal some of the biggest lessons I learned as an equity analyst for venture capital and private investors.