Warren Buffett is betting big on shares of Apple stock, but should you follow with your money?

Warren Buffett has more than a fifth of his Berkshire portfolio in one single stock. What’s even more surprising is that it’s in an industry he’s always hated.

The investment has worked out so far but Buffett just recently bought more after the stock zoomed higher. By the end of the video, you’ll know exactly what Buffett sees in this company and whether you should follow him in the stock.

Buffett took the lead for the Berkshire Hathaway holding company in 1965 and has rewarded investors ever since. Returns on shares have climbed 20% annually over the last 38 years, more than doubling the return on the broader market. That means instant market-buzz anytime the company files its Form 13-F, that’s the disclosure all large money managers have to file every three months.

That look into Buffett’s investments is what we’re using for this video series on the Oracle of Omaha’s stocks.

We’re looking at Buffett’s biggest investments, his favorite industries and even his worst investment. We’ll look at the stocks Buffett believes in, why he loves them and how you can use all this to find your own investments.

I’ll also be putting all the videos in a special playlist on YouTube so be sure to subscribe.

The Berkshire equity portfolio includes just 42 companies for a total of $196 billion and is surprisingly concentrated in three industries; Banking (29.4%), Consumer Staples (18.4%), and Credit & Financial Services (11.9%). These are all normal investing targets for Buffett. He likes the consistency of cash flows and the sectors don’t change quickly.

But Buffett also has $45 billion in a technology company, a sector in which he’s rarely invested and has often says he doesn’t like the fact that innovation can make great companies obsolete so quickly. 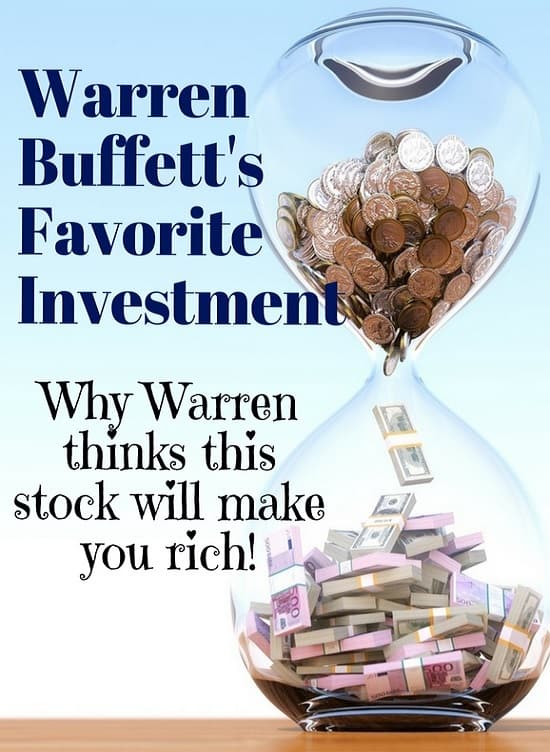 Now that big bet on tech is actually $45 billion in a single company, that’s more than a fifth of the entire portfolio in just one stock. In this video, we’ll look at this the investment, why Buffett thinks it could be the stock of the decade and why I think he might be wrong on this one.

That large tech investment is, of course, Apple (Nasdaq: AAPL) to which Buffett added 74 million shares in early 2018 for a total worth $44.8 billion. Buffett has said he doesn’t believe in diversification, instead choosing to pick individual investments, and he’s proving it here.

The amount he has invested in Apple isn’t the surprising part, it’s the fact that he’s investing in tech at all after his IBM investment only broke even after six years.

So Buffett must have some pretty good reasons for wanting to own more than 5% of the iPhone giant.

Why Warren Buffett Invests in Shares of Apple

Let’s first look at what Buffett has said he sees in Apple and then look at some fundamentals for investors.

First, Apple has a GINORMOUS amount of cash, more than $267 billion sitting on the balance sheet last quarter. We know that Buffett loves cash, usually cash flow from mature companies, but that Apple cash gives it a lot of options and flexibility.

Buffett has said he wants the company to devote more of it to buying back the shares and Apple has said it will spend $100 billion doing just that. Even as a tech company that constantly needs to spend on R&D and innovate, Apple is a cash flow machine.

This is its Statement of Cash Flows, my favorite financial statement and one that should be your new best friend if you’re picking stocks.

Apple generated nearly $66 billion in operational cash flow last year and spent just under $64 billion for growing the business, aka investing cash flow, and in financing.

It generated over $50 billion in free cash flow, which is the operational cash minus investments it made to keep the company heading in the right direction.

Besides his affinity for cash generating businesses, Buffett is a value investor at heart. He’s made his best deals during bear markets when he could get preferred shares with huge dividends and convertible into common stock.

Apple checked this box when Berkshire first added shares in early 2016. Shares had fallen about 25% from the 2015 high on worries about the product refresh cycle, something that happens a lot with Apple and we’ll talk more about this later in the video.

So Buffett was getting the shares at a discount and what turned out to be a great value.

Finally, even though Apple is a tech company at its heart, it’s also a consumer goods company, right? Apple and Samsung have carved out about 20% of the global smartphone space each, more than double the market share for any other competitor.

Besides those things in your pocket that used to be for calling people, Apple has its other products like the iPad and Macs as well as services like iTunes. Even if you’re not an “Apple” person, you probably have at least one product or service.

Why You Should Wait to Invest in Apple

So Apple checks a lot of the boxes for Buffett and he’s done great with the investment but let’s look a little closer at the fundamentals and I’ll show you why you might want to wait to follow the Oracle into this bet.

First, the most obvious objection is just the price. I’m a little surprised that Buffett jumped in again in 2018 after shares of Apple have almost doubled his initial price.

The stock is now trading for over 17-times the company’s earnings over the last year, over the long-term average of around 14-times and over the low of around 10-times earnings it often hits when investors start worrying about the product life-cycle.

In fact, I invested in Apple in 2013, another time when investors sold out and the shares hit that rock-bottom valuation around 10- or 12-times earnings.

Of course, investor enthusiasm for Apple has always been about the product refresh cycle, when it will unveil upgrades to the iPhone and other products. Apple has to manage this carefully because customers usually get help paying for their phones with two-year contracts so aren’t going to want to update every year. Apple manages this by having different tiers of its phones, different models and updating them in different years.

The big selloff in 2013 and 2016 were both about this product refresh cycle. Apple had already rolled out the major upgrades in its biggest sellers and investors were worried that sales would be weak in the near-term for lack of new, exciting updates.

We’re starting to see some signs of this again. Last year was the 10th anniversary of the iPhone so Apple went big with the iPhone X but there just doesn’t seem to be much enthusiasm or the rumors there usually are for the September event this year where the company typically announces its upgrades.

It seems customers are getting a little tired as well. Tokyo’s Nikkei newspaper reported in June that Apple was reducing iPhone component production by 20% through suppliers, in a sign of slowing demand for the phones this year.

The problem here isn’t that Apple won’t continue to make A LOT OF MONEY, it will. The problem is that enthusiasm for the products comes in waves and we’re already at the top of one of those waves. If you are thinking about investing in Apple, the worst you can do is put all your investment in at once right now.

I would wait a few months at least for a better price but if you have to do something right now, try legging in with just a third of what you planned on investing. You can invest the rest in two buys over the next year or so to take advantage of better prices if they come along.

A longer-term threat to Apple is competition in the smartphone space. Chinese producer Xiaomi doubled its shipments in 2017 to 92 million smartphones and grew faster than Apple, Samsung and Huawei combined.

Global market share jumped to 6% from just under 4% in 2016 and the company went public recently so it’s got a lot of cash now it can use for more growth. Other rivals like OPPO and Huawei have also increased their market share while Apple has fought to hold its share steady.

Apple sells to a higher price part of the market and its brand helps it retain market share but there will be a point where investors have to start worrying about a slow bleed of customers to some of these other competitors.

Obviously Warren Buffett’s 2016 investment in Apple was a good one but I’m not so sure about his purchase of more shares in 2018. As a very long-term investors, he’ll still make money even if the price comes down for a while but I think new investors will have a better opportunity if they wait six months to a year.