When you’re in a pinch and need money, it can be tempting to consider taking a loan from your 401k plan. After all, the money is yours and when you pay it back, you’re paying yourself back.

You wouldn’t be alone. Some 11% of workers took 401k loans during the past year, with an average loan amount of $9,500 borrowed from their retirement account.

But although it may seem harmless, taking a loan from your 401k can have negative consequences, especially for the 40% of borrowers who decrease their savings rate after taking a loan.

Research shows that taking money from your workplace retirement plan, even when you intend to pay it back, can have a lasting impact on your future retirement savings.

Here are five reasons to think twice before taking a 401k loan from your retirement plan:

1. Many don’t continue to save at the same rate on their 401k after taking out a loan.

Taking a loan may affect how much you can afford to contribute to your retirement plan. Paying back what you borrowed may leave you with less money to contribute. 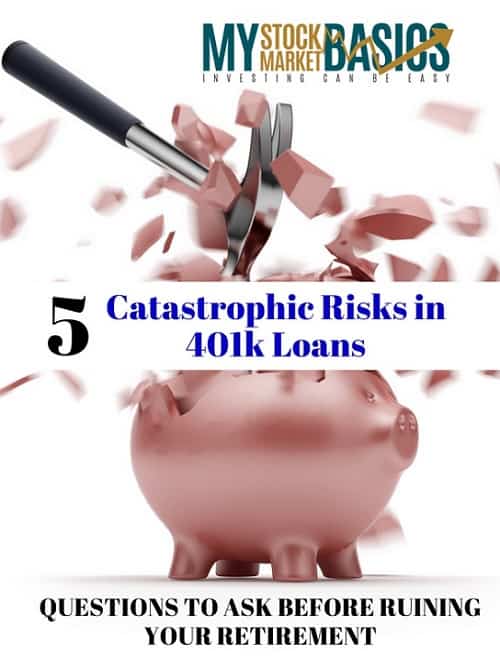 In a Fidelity study of 401k loans taken from 2007 to 2013, almost one-in-four of the borrowers decreased their savings rate in the first year after a loan was taken. One-in-ten people stopped making contributions altogether.

And the numbers get worse over time. Borrowers further along in their repayments were more likely to have decreased their contributions.

In fact, within five years, 40% of borrowers had reduced their savings rate from pre-loan levels and 15% had stopped saving altogether.

The effects of reducing or stopping your 401k contributions are catastrophic to your retirement savings. For example, consider two employees, age 25, who each earn $50,000 and defer 10% annually in a traditional 401k.

The first employee takes a 401k loan and maintains his contributions until retirement and beyond. At retirement, his 401k balance is $537,000 or about $2,237 in monthly income.

The second employee also takes a 401k loan, but instead of keeping up his contribution rate, he reduces his investments to nothing for 10 years and then resumes his original savings rate. His plan balance at retirement is $396,000—producing an estimated monthly income of $1,960, or $690 less per month than the employee who kept up with his contributions.

You contribute pretax dollars to a traditional workplace retirement account. You don’t pay income taxes on the contributions or their growth until you begin taking withdrawals during retirement (unless you take early withdrawals, which are subject to both income tax and a potential 10% IRS penalty).

The combination of those tax advantages and the potential of your investment portfolio to grow give your savings the boost you may need in retirement.

When you take a loan from a traditional 401k, you may have a negative impact on the tax deferral benefits. Here’s how:

3. If you’re borrowing to buy a home, the impact may be greater.

Borrowers taking home loans from their 401ks represent just under 3% of people with 401k loans, but the number has been increasing steadily since 2009.

That’s problematic for a few reasons:

Your first 401k loan can be like a gateway loan that leads to habitual borrowing from your retirement account. Fidelity analysis of 401k investors shows that one out of two 401k borrowers went on to take additional loans.

In some of these cases, outside circumstances lead the investor to take each one of these loans, so it isn’t always the case that one loan is the direct cause of the one that follows it; but all too often it seems that the first loan makes it easier to take a second, the second led to a third, and so on.

Hardship withdrawals are withdrawals permitted by your plan for specific expenses, which can range from medical expenses to college tuition. Unlike plan loans, hardship withdrawals cannot be repaid. The money is taken permanently out of your account, which could have long-term ramifications on your financial security in retirement.

After you take a hardship withdrawal, you are generally prohibited from making contributions to your plan for six months, must pay income tax on the amount you withdraw, and may be subject to 10% penalty if you are under age 59½, for taking an early distribution, and you might be subject to a state penalty as well.

Consider opening a Roth IRA for your retirement savings. While it's still not a good idea, you can always withdraw your Roth contributions without a penalty or tax.

5. You’ll have to repay the loan quickly if you leave your job for any reason.

You typically have to repay any outstanding balance on your 401k loan within 60 days when you separate from the company that offers the retirement plan. Employees usually stay at their jobs for about four-and-a-half years, according to a 2014 survey from the Bureau of Labor Statistics.

If you plan to take a loan from your retirement plan, you’ll want to consider how long you plan to remain at your job, and whether that timeline fits with the duration of the loan. Be especially wary of borrowing from your plan if you think you could be laid off or fired.

Taking a loan from your 401k is a big decision, and not to be taken lightly. In a 2011 Fidelity survey, nearly 40% of retirees who had taken a loan said that they would not do so again, and a third of plan participants who had not yet retired agreed with that sentiment.

Ask yourself these questions before taking your 401k loan and potentially setting yourself back in retirement.

Before you tap into your retirement savings with a 401k loan, be sure to look carefully at your finances. These retirement account loans can seem like the easy solution but they’re filled with all kinds of hidden traps and worries. They can seriously set your retirement planning back and should only be used as a last resort.