There’s no reason to lose money on your emergency fund if you follow this strategy.

The conventional wisdom is that you need to set aside between three- and six-months’ worth of expenses in an emergency fund.

This money is meant to pay for big, unplanned expenses like healthcare or for regular living expenses if you lose your job for several months.

I could rehash a hundred examples of other times when the ‘conventional wisdom’ was wrong in everything from civil rights to finances. Instead, let’s just look at what this rule-of-thumb does to your money and see if there’s a better solution.

What an Emergency Fund Does to Your Money

A traditional emergency fund is ‘invested’ in money market CDs that earn 0.08% on average and in savings accounts earning 0.06% on average.

That means earning 0.07% on your money while losing 1.7% a year to inflation. An emergency fund of $20,000 would lose $324 a year because prices would be going up but your money is sound asleep. 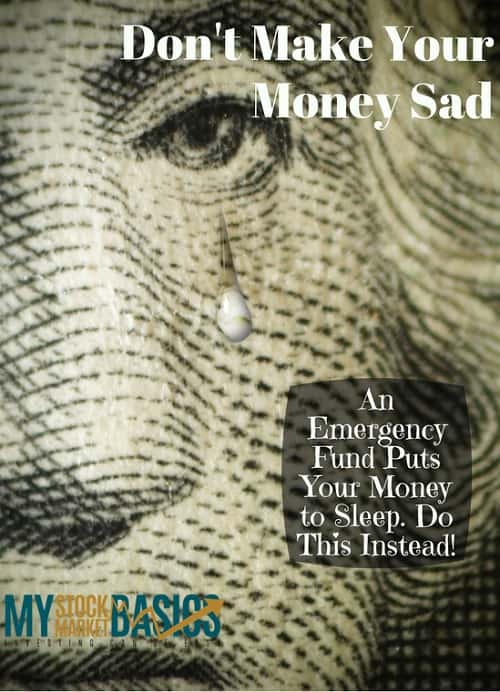 Some people recommend investing your emergency fund in other assets like savings bonds and government Treasury bonds. The problem is that none of these give you immediate access to your money without a penalty. Others say you can invest in safe stocks like utility companies but that still leaves your money exposed to huge swings in value.

If your emergency fund is investing in anything where the value could rise or fall more than a few percent a year or that you can’t withdraw in a few days’ then it’s not an emergency fund. It might not be there for a true emergency.

Why Do I Need an Emergency Fund Anyway?

The question should be, do you really need an emergency fund?

The Kaiser Family Foundation reports the average family pays $1,300 out-of-pocket for healthcare before insurance kicks in. Families in high-deductible plans pay out $4,332 on average before insurance.

AAA reports car repair bills average between $500 to $600 and owners spend an average of $766 a year in maintenance.

The average worker changes jobs 12 times in their lives but most of those are voluntary rather than getting laid off or fired.

None of these expenses even comes close to costing three- to six-months’ worth of expenses for most families. Unless several happen at once or you lose your job for several months with no unemployment checks, you’re usually looking at an emergency fund that is slowly losing its value.

Dustin of MasterPassiveIncome argues the need for an emergency fund for your business and makes some great points. I think starting a new business is much less certain than some of the expenses we face on the personal finance side and entrepreneurs need to be ready for the unexpected.

What to Do with Your Money Instead of an Emergency Fund

There is little reason you cannot mingle your emergency fund money with your general investments if you follow basic investing rules.

Bond ETFs hold thousands of bonds from hundreds of companies and rarely see their value rise or fall more than a few percentage points a year. The iShares Core U.S. Aggregate Bond ETF holds a mix of corporate bonds and Treasuries, paying 2.47% in dividends a year and has produced a 3.9% total annual return over the last decade.

When the stock market crashed to its low in March 2009, the bond ETF returned 11% over the 20 months’ of falling stock prices.

Since bond funds trade like stocks, you can sell them in seconds for fast access to the money. There are no early withdrawal penalties and the only fees are those charged by your discount online broker.

The problem here is that many investors will ignore the need to diversify their money across stocks, bonds and real estate. They’ll chase higher returns in stocks and may see their portfolio value shrink at the same time they need money to pay for emergency expenses.

Invest at least 15% to 20% of your money in bond funds and you will have a ready source of cash for emergencies. Tweak the amount you hold in bonds by how much you might need for emergencies, i.e. that three- to six-month rule.

I agree that everyone should have something set aside. I just hate to see my money sitting there, earning next to nothing. I pay for insurance on my home, my life and my health so it isn't that different from having an emergency fund but investing my oh-chit money just gives me a little more financial control.

There’s really no need for a traditional emergency fund. Why lose hundreds of dollars every year waiting for expenses that will rarely require even half of your emergency fund? Invest your savings normally but on sound investing rules with enough money in bond funds to cover those emergency expenses. You’ll earn a return and still be safe from the unspeakable.