It’s been a little over three months since I started tracking the four investing funds I created on Motif Investing and follow in the My Stocks and Bonds section. These are all investments that I’ve made on different investing themes and that have the potential to help you meet your investing goals.

This post is the first where I review the progress on each investing fund and talk about any changes made to the funds. Since they are all long-term investing themes, changes are rare but do happen occasionally.

I’ve got to admit, this post is more than just a review. The first investing fund we’ll cover has nearly doubled the return on the stock market over the last few months and I think the rest of the year could be even better. It’s a long-term investing theme but it’s always nice to see your investment ideas produce strong returns.

The Future Investing Fund Beating the Market by 9%

I highlighted the American Futures Fund in a prior post, talking about how three sectors will dominate the global economy and could be the best investments for the next 30 years. The fund was started in February with roughly equal investments across energy, agriculture and healthcare. The four exchange traded funds (ETF) account for about half the investment fund and give me instant exposure to hundreds of companies. The ten investments in individual stocks gives me exposure to best-in-class names across the three sectors.

The investing fund is one of four I follow as My Stocks and Bonds, which I created on the Motif Investing platform. The other three funds have also beaten the S&P 500 by an average of 2.5% since earlier this year. I like investing on Motif because I can create funds like these from up to 30 stocks and then buy the group for just one commission, saving hundreds compared to other investing websites.

The rebound in energy prices have taken the fund for a ride, with a return of 18.1% in less than four months. That’s nearly 10% better than the S&P 500 over the period. Every investment in the fund has a positive return ranging from 1.8% to a 43% gain on shares of Marathon Oil Corporation. 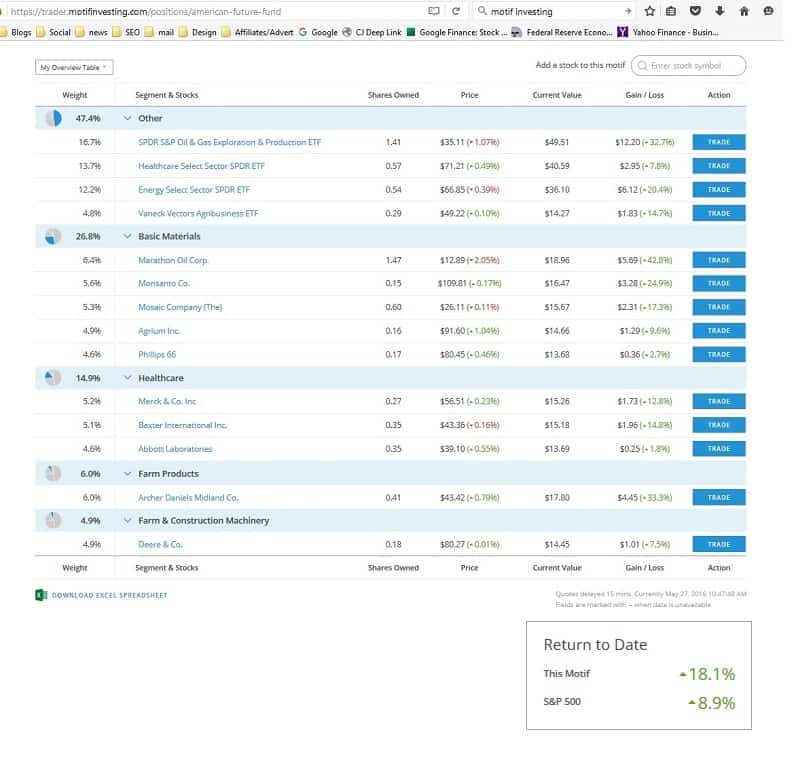 The investing fund now has about 40% of its value in energy investments. I am tempted to pull back on some of the energy investments to balance the fund back out a little but that kind of short-term trading isn’t what the investing fund is about. The quick gain on oil stocks looks like it is slowing down as the price of crude bumps up against $50 per barrel but the long-term story is still very much intact.

A lot of the pull back in drilling activity has yet to come through in production numbers and the world is going to be needing a lot more oil & gas over the next couple of decades. Oil might not go much higher this year but will return to highs before too long. Oil companies are great for returning cash to shareholders through dividends and the stocks are still great long-term investments.

Gains for this Investment Fund Are Not Even Close to Over

What has me even more excited about the fund is the outlook for agricultural commodities and stocks in the sector. Agriculture has gotten slammed over the last year as record harvests in the U.S. drove grain prices lower and demand for fertilizer components weakened. A lot of this has been on the El Nino weather pattern that brought very favorable growing seasons to North America. Fertilizer demand also weakened in parts of the southern hemisphere, especially in Asia, were El Nino caused record droughts. 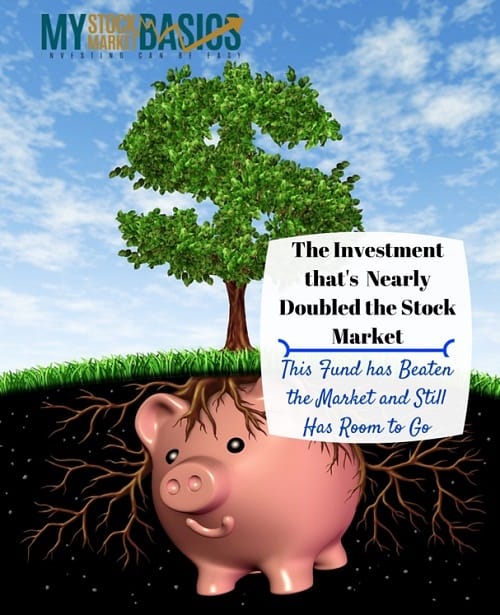 Now climatologists are predicting a full 360 saying that the La Nina weather pattern could hit by the end of the year. The U.S. Climate Prediction Center puts the odds at better than 75% by December and Australia’s Bureau of Meteorology is putting it at 50/50 for some time between July and September.

It’s important because La Nina is the opposite of what we’ve seen over the last few years. The Northern Hemisphere could see droughts as rain pours in parts of the Southern Hemisphere. Remember the massive U.S. heat wave and drought of 2012 where corn prices surged to record highs? That was the tail-end of the last La Nina pattern from 2010 to 2012. India has been struggling under an historic multi-year drought but is now expecting higher-than-average rainfall starting in June, revitalizing agriculture and boosting fertilizer demand.

Insiders within agriculture have already started to position for the boost to industry sales by buying up other companies. Both Monsanto and ChemChina have tried to buy agricultural chemicals giant Syngenta over the past year with the current bid at $43 billion, a premium of 34% on its pre-acquisition value.

Just recently, Bayer offered $62 billion for seed powerhouse Monsanto for a 50% premium on its pre-rumors value. Monsanto declined the offer but said it was open to talks at the right price.

I outlined the reasons why agriculture will be one of the best investments over the next 30 years as the world tries to feed more than nine billion people. Crop production just isn’t keeping up and the only solution will come from higher fertilizer use and innovative seed products. The La Nina weather pattern may bring fast gains to the investment fund but the real upside is still over the long-term.

Check out The American Future Fund and Others on Motif Investing

It’s tough not to get excited about these short-term gains and to want to take some profits but resist the urge. Investing is about meeting your long-term goals and the three sectors in the American Future investing fund should benefit from some great forces over the next several decades. Enjoy the quick upside in the stocks but stick to your regular investing plan and keep your eye on the future.