A lot of good financial decisions don’t make much financial sense. You can crunch the numbers all you want but they’re just not going to add up.

For example, buying a home versus renting. The actual return on home ownership is lower than what you could get investing but it’s still one of the best financial decisions you can make.

Buying a home is a forced savings plan and a consistent return, something than many people sorely need. So, the decision is a good one even if the numbers don’t always work out.

Another hotly debated financial topic is whether you should work to pay off your debt before getting started investing.

Spoiler alert, the numbers aren’t going to add up here either but this is one financial decision that could secure your financial future.

What are the Numbers Behind the Invest vs Debt Payoff Debate?

But what about lower-rate debt?

What about very long-term debt like mortgages and student loans? Waiting 15 years to start investing means missing out on a lot of growth in retirement savings.

Let’s look at the numbers in the debt payoff vs investing debate.

Now let’s imagine you have $500 extra a month…(yeah, that would be nice) and can either put it to paying off debt or investing over five years.

So it would seem that paying off debt before you start investing would be the smart financial decision, right?

Just going by the numbers, it doesn’t make sense to invest for even an 8% return if you’re paying a higher rate on personal loans or credit cards. 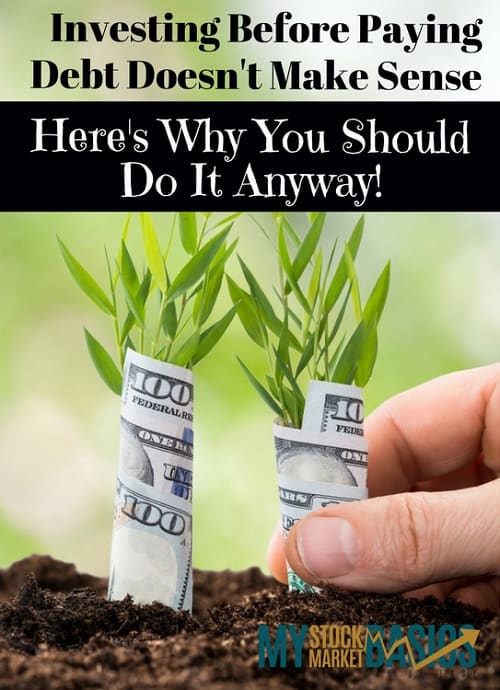 But it is one of the best financial decisions you can make.

Because shopping is too much fun.

What do Millennials, Gen-X and Baby Boomers all have in common? They all have debt!

The average American household owes over $52,500 in debt not including mortgages.

A lot of people are never going to completely pay off all their debt, even with great tools like this debt payoff calculator. Many others will pay it off but it will take decades to accomplish.

As a financial blogger, I’m not supposed to say that but it’s a reality.

That may sound like giving up on being financially responsible. I’m not saying you should stop paying off debt or stop trying to pay it off as quickly as possible, I’m just trying to be realistic here.

But everyone; you, me and even the Millennials are all going to retire someday. That means we all need to be putting some gold aside for those golden years.

First, it gets you into the habit of saving and investing.

Paying off debt has its own built-in motivator. You have to make minimum payments and those pesky interest charges are a strong incentive to pay extra. You might not get that same motivation from saving to invest. It’s tough imagining what life will be like 30-years into the future after you’ve worked to build your retirement portfolio.

Get started investing, even if it’s just $50 a month. Getting in the habit of putting something in an investment account will make it easier to put more money in when you are able.

The second reason to start investing before you pay off debt is that you’ll earn money on your money longer.

Even that $50 a month can grow to $71,500 over three decades on the blended market return. Trying to pay off debt first means you might not get around to investing until well into your 40s or later. Building to that $71,500 by the time you reach 65 means depositing nearly $210 a month if you don’t get started until 50 years old.

And there’s always something else to spend the money on, right? Vacations, tuition, unexpected medical bills…there will always be something competing for the money which could be going to retirement investing.

You should still try paying down your debt balances, especially the ones with rates of 10% or higher, but balance it with investing. This especially means credit cards because they are the worst type of debt. Check out this credit card payoff calculator to see what I mean and how much money you're losing to interest.

Even if you never fully pay down your debt, your investments will grow and someday you’ll be able to make one big payment to ditch your debt forever and still have something left for those sandy beaches.

Investing before you pay off debt may not make financial sense if you look at the numbers but it’s one of the best financial decisions you can make. Getting started investing will get you in the habit of saving and you’ll make money on your money for decades. It’s the best way to get to your financial destination with more than just a few paid bills and a check from Social Security.