Don’t avoid starting an emergency fund for fear of low returns, invest it right for safety and income

Like any other insurance, emergency funds are something everyone knows they should have but few actually keep the right amount. The problem is that it’s so hard to sit there and watch your emergency fund earn next to nothing in savings. Worse still is the fact that most emergency fund investments like savings bonds or money market funds pay less than inflation, meaning the spending power of your savings actually decreases over time.

But emergency funds are a critical part of your path to financial independence and one of the 12-steps on my checklist to financial freedom. Just one accident or bout of unemployment can destroy a lifetime of saving and investing if you’re not ready with emergency savings.

Think you don’t have to worry about unemployment or that you’ll take your chances? One-in-five Americans were laid off over the five years to 2014. That’s 20% of the workforce that lost their job at no fault of their own, just because the economy took a tumble.

Starting and maintaining an emergency fund doesn’t have to be a pain and you can actually make a decent return on your funds. Follow these steps to determine how much emergency fund you need and how to invest your money.

Why do I need an emergency fund?

An emergency fund is money set aside to pay for living expenses or special bills in the event you’re unemployed or have a health emergency. The rule of thumb has always been to have three to six months’ worth of your normal expenses set aside in a savings account or money market account.

The problem is that most budgets, after paying living expenses and taking 10% or more out for retirement planning, just don’t have much left to start an emergency fund.

The most common response I get to the question, “Why don’t you have an emergency fund?” is the belief that you can just take money out of investments given the need. We’re not talking about retirement accounts where you pay a penalty on withdrawals but general investment accounts from which you can withdraw money anytime.

People figure that, on the off chance they’ll need a few months’ expenses, they can always just take it from investments and put it back later.

The problem is that you may need emergency fund savings at exactly the wrong time to be selling investments. Think about the tens of millions that got laid off during the 2008 recession and what happened to the stock market. Stocks crashed by 50% from mid-2007 to March 2009. Not only are you selling investments at a low-point but you have to put in more money just to get back to even.

The idea of an emergency fund is to have quick cash available without having to worry about changes in its value.

According to the Bureau of Labor Statistics, the average family spends about $4,300 a month though your own expenses could be much higher or lower. Going off the old three-to-six month rule, you’d need between about $13k to $25k for your emergency fund.

The three-to-six month rule hit a serious problem during the last recession with the extremely long periods that people were unemployed. The graphic below shows the average time people were unemployed all the way back to the 1950s. Until the 2008 recession, the average time a person was usually unemployed was about 20 weeks (4.6 months). That average shot up to 40 weeks (9.2 months) in 2011 and is still much higher than any other time in history. 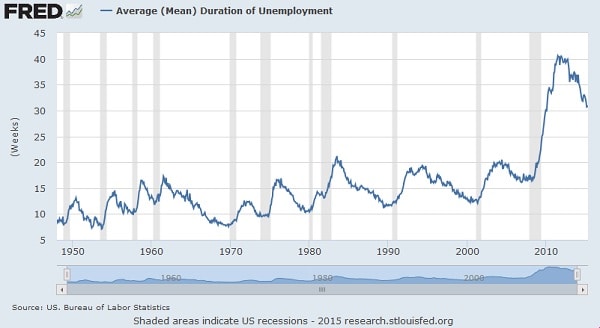 Healthcare costs continue to shoot up and threaten the three-to-six month rule as well. Inpatient hospital services account for only 7% of health care visits but 29% of total costs. The average inpatient visit costs $4,701 with the average out-of-pocket cost after insurance of $768 for each visit. Older adults between the ages of 54 and 64 years old spent the most with out-of-pocket costs of $1,265 per visit.

Given all this, you should probably hold between four months and eight months of living expenses in an emergency fund. Figuring out exactly how much you need is not too difficult.

Still not convinced that you need an emergency fund? Use this simple savings calculator to see how fast your money adds up and how to make the most of your savings.

How to Invest your Emergency Fund 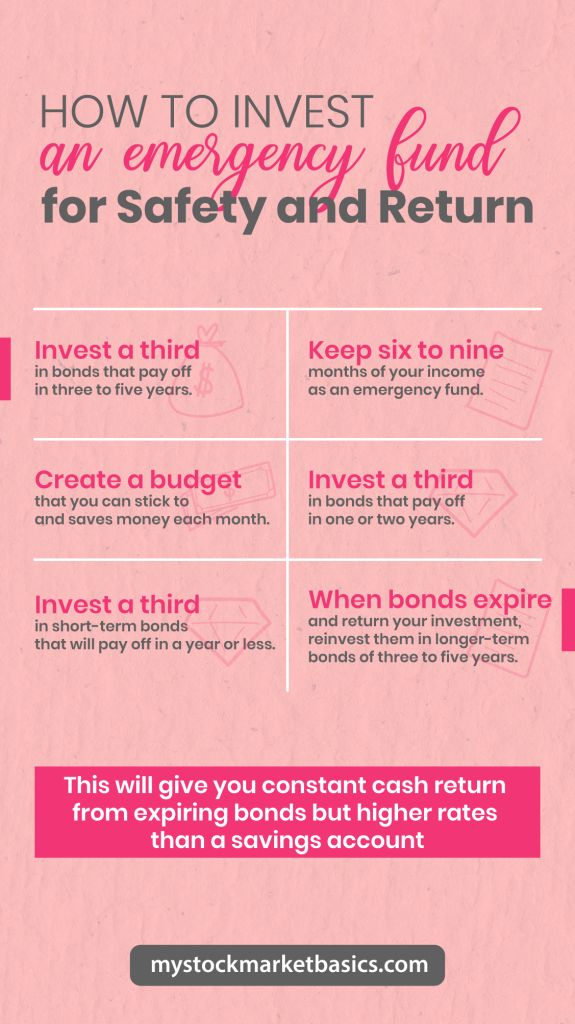 A lot of people plan on withdrawing money from a whole-life or cash-accumulating life insurance policy in the even of an emergency. This is a solution sold to you by insurance agents but is usually a terrible one. First, premiums for whole life insurance are much higher because the plan “offers” the savings feature and commissions paid to agents are outrageous. The interest rate you earn on your accumulated savings is very low, usually less than most other investments, and you might not have enough cash accumulated on the policy to cover emergencies until after decades of payments.

So what is an investor to do if they want to earn a decent return for their emergency fund savings?

Some emergency fund purists will disagree with me but I like a different approach for my own fund investments. While bond investments can lose value if interest rates increase, you lock in a return if you hold the bonds until they mature. The problem is that you don’t know when you’ll need your emergency money and might not be able to wait until your bond investments mature.

This is fixed with a Laddered Bond Investment Strategy where you invest in bonds with different maturities. This is a strategy we talked about in our Guide to Bond Investing and is a strategy that most should use even if they are not using bonds for their emergency fund savings.

In a normal laddered bond strategy, you might have bonds maturing every year or few years. You receive a large check, usually $1,000 for each bond you hold, when the investment matures. For a laddered bond strategy in which you also invest your emergency fund, you should have bonds maturing every six months to ensure cash available. Each time a set of bonds matures, you reinvest the money in a longer maturity group of bonds unless you need the money for emergency expenses. 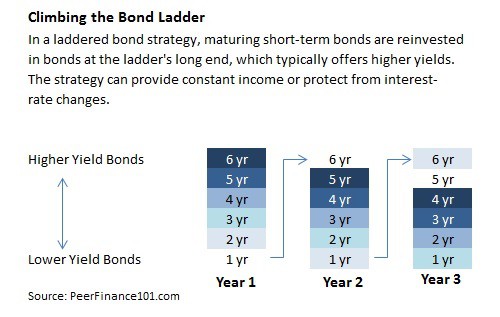 Bonds of AA-rated companies maturing in two years are paying 1.2% with rates for ten-year bonds at 3.2% for some of the safest companies. When you first start your bond ladder strategy, you will need to buy some very short-maturity bonds for the first couple of years. Once started though, you can reinvest in longer-maturity bonds because you’ll constantly have some maturing in six months or a year.

Using a laddered bond strategy means interest rates of up to 2.8% higher for your emergency fund savings. That same $20,000 fund that was losing $232 a year to inflation is now making $480 a year in interest and you still have an available source of funds through bond maturities if you need emergency money. Even if you need the money at some point when bonds aren’t maturing, bond prices don’t fluctuate as much for very short-term bonds and you can sell them quickly for fast cash.

While it won’t work exactly the same because it’s an investment in bond funds, the Fixed Maturity Ladder fund on Motif Investing

is another option. The fund invest in bonds maturing over the next five years and pays a very high 2.3% dividend yield. The fund won’t mature and pay out a lump sum payment but you also won’t have the reinvestment fees from investing in traditional bonds.

How to Invest an Emergency Fund

An emergency fund is an absolute must for anyone planning their path to financial freedom. While you may only rarely need the money to cover living expenses or emergency costs, not having a fund could set you back to zero on your way to financial independence. With a little planning, you don’t have to sacrifice return on your investments for the safety of cash. Make an emergency fund a part of your financial planning and have the peace of mind that you will reach your financial goals.