Tune in to CNBC or any one of the thousands of investing websites daily and you’re likely to find hundreds of stock picks. Investors go crazy over hot stocks and making huge returns on the next hot investing tip. It’s the intelligent investor that wins in the long-run, making modest gains each year and avoiding the big crashes in hot stocks.

This is the first post of our series reviewing each chapter in The Intelligent Investor. First published in 1973 by Benjamin Graham, it ranks up there in the top five best investing books ever written.

In fact, Warren Buffett credits his investing style to Graham and has called it, “By far the best book on investing ever written.”

Graham fathered today’s investment profession with his textbook on Securities Analysis and is the guiding influence for the Chartered Financial Analyst (CFA) designation. I’ll be reviewing the most recent edition by First Collins, with notes by Jason Zweig and prefaced by Warren Buffett.

The Intelligent Investor is so powerful because it isn’t about all the hype you hear in today’s investing media. The book is about what I believe is the only way to get rich in the stock market through three core ideas and some of the same stock market basics we talk about on the blog.

That’s it, just three simple investing rules that helped Graham outperform the market for 20 years during his career and have helped Warren Buffett become one of the richest men in the world.

Why Everyone Needs to Read The Intelligent Investor

This is one of the few investing books I’ve read that is written for the individual investor, the ordinary guy and gal that just wants to start investing to meet their financial goals.

The beauty of being an ‘intelligent investor’ is that you don’t have to be a rocket scientist. In fact, IQ has nothing to do with it and some of the smartest around have been caught in historic stock market crashes. Zweig notes Sir Isaac Newton’s folly into stocks in what was one of the first stock market bubbles.

Newton bought shares of the South Sea Company in 1720 but feared a runaway market and unpredictable prices saying he, “could calculate the motions of the heavenly bodies but not the madness of the people.”

He sold his stock for a 100% profit and made £7,000 but got caught up in the market’s excitement, buying the shares back in a few months and ended up losing £20,000 when the stock crashed. After that, it’s rumored that he would forever forbade anyone from saying the words ‘South Sea’ while he was around.

The book is full of examples like these where even the brightest are brought down by a market crash but it’s also through the key lessons that have helped ordinary people like you and me exceed our investing goals.

Visit Amazon for The Intelligent Investor on Kindle or Paperback


The first chapter sets the stage for the rest of the book and centers around one of the most important money lessons, be an investor rather than a speculator.

An investor thoroughly analyzes a company and the stock’s value relative to long-term potential. The investor diversifies their portfolio across many stocks and expects modest returns.

It's tough not to be the speculator, gambling on the big win rather than investing for the single-digit long-term growth. Everything you hear on CNBC or Yahoo Finance is about ‘beating the market’ and investing is more about entertainment than it is meeting your goals.

But gambling on your stocks will always end up badly. You’ll pay a premium on shares of hot stocks because of their popularity and for expected growth years into the future. When the company fails to meet lofty sales expectations, the stock crashes and your investments are destroyed because you had so much in one name.

One of my favorite ways to diversify my portfolio is by investing around a larger theme rather than an individual stock. I can group up to 30 stocks together and buy them all for one commission on Motif Investing. I get instant diversification and lower investing fees while avoiding getting too caught up in the hype over one company.

Beware of Hot Stock Tips and Paying for Future Growth

Now I’m going to do something that will probably piss a lot of people off. Take a look at the two charts below.

The stock on the left typically costs more than 100 times the earnings the company has made over the previous twelve months. Investors love the stock and call it a ‘disruptor’ in its industry. The stock on the right trades for 22 times this 61-year old company’s earnings.

But the stock on the left has still managed a 700%+ gain over the decade, beating the 400% return on the other stock…it’s the better buy despite the expensive price, right?

But what about those three peaks in the stock price just before shares came crashing down?

During the stock market crash of 2008, the speculator’s stock tumbled 65% while the investor’s stock only fell 6% to the March 2009 low.

The stock on the left is Chipotle Mexican Grill while the other is McDonald’s. There are some good reasons to own Chipotle including faster sales growth and a growing Mexican-dining market but the shares have gotten a cult following that has pushed the price up to dizzying heights.

Don’t think Chipotle is such a ‘hot’ stock. What about Tesla Motors? 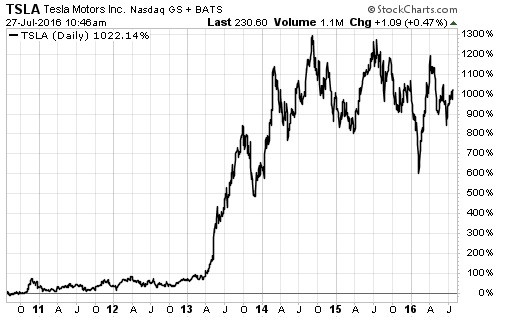 Here’s a stock that has only been trading for six years and has lost money every year so far. It’s expected to earn $0.35 per share this year which would mean investors are paying a price 660-times higher than the earnings they are entitled to from the stock!

Not to mention that the company’s founder, Elon Musk, just used shareholder money to bail out his other company, Solar City, by acquiring it for a 30% premium. Investors have little choice in the matter because Musk, his family and management own the majority of voting shares.

But that 1,000% return still draws investors in on a daily basis, never mind that almost all the money was made by early investors. If you were unfortunate enough to jump in at just about any time over the last two years, your returns would be something entirely different.

Yet investors continue to love hot stocks like Tesla, Chipotle and Netflix. In fact, I’ve warned investors on several blogs about shares of Tesla over the last year only to receive hate mail at the idea that Elon Musk could be anything other than the second coming of Christ.

The fact is that long-term investing favors the proven, boring companies. Investors bid the price of hot stocks so high because of growth expectations years into the future or a mystique around the founder and invariably get caught in the crash when the company fails to meet expectations.

Investor excitement and speculation can happen for the general market as well. As I write this, investors are paying a price of 24.9-times one-year earnings for companies in the S&P 500. That’s the 500 largest companies in America, a benchmark for the market that has traded for an average of around 16-times over the past five decades. 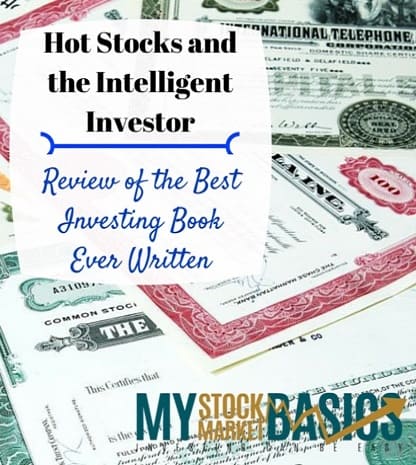 So investors are paying about 56% more for stocks right now but the economy is good and stocks should continue to go up, right?

Companies are reporting their earnings for the April – June period of the year right now. It’s expected that those same companies in the S&P 500 will report a decline in profits of 5% against the same period last year. That would mark the fifth consecutive quarter of lower earnings.

Since stock of a company is just an ownership of earnings, investors are paying more money for stock that is worth less. What’s wrong with this picture?

So how do you avoid speculating in stocks or the general market?

Later on in the book, we look at more detail on how to tell if a company or the general market is expensive and how to shift your investments across asset classes. The first chapter simply sets the stage for the difference between speculating and investing.

Ready for Chapter 2? Click here to learn Why your Investments are Worth Half as Much as You Think!

I’ve gone further into the idea of hot stocks and the market’s love of speculation than in the book. The first chapter talks more about the historic returns on the market and compares it with periods where investors expected much more during market bubbles.

The important idea is to understand that you don’t have to invest in the same popular, over-hyped stocks as everyone else. Investing is not what you see on TV or what you read about on most investing websites. Avoid hot stocks and stock market bubbles by being an investor rather than a speculator…and join us next week for our review of chapter two in The Intelligent Investor.