Everyone needs a break now and then, even the stock market and investors.

I don’t normally talk about technical trading signals on the blog, instead recommending a long-term, buy-and-hold investment strategy, but there is something to be said for stock market anomalies.

We’ve already looked at some of the most consistent stock market anomalies and the sell-in-May stock signal seems to be in full effect this year.

Another popular market anomaly is stock trading around holidays, known as the holiday effect. Let’s look at data from the Stock Trader’s Almanac to see which holidays may offer strategies for returns.

What is the Holiday Effect in Stock Trading?

The holiday effect in stocks is simply following the days before and after a market holiday. There are different reasons why stocks may be up or down consistently before certain holidays and some of the historical data looks like it might provide a consistent cue.

Should you trade the holiday effect in stocks?

Probably not. Most investors are much better off just using a stress-free investing approach of buy-and-hold. I’ve used market anomalies when managing other people’s money and when consulting but only when they had a high tolerance for risk and explicitly wanted to reach for every fractional percent of return.

The overall results are mixed on how much you can actually make with the holiday effect. You’ll see in each section that it’s sometimes hit-or-miss whether history will be any help at all. Few of the holidays show much of a gain one way or the other.

Still, it’s worth looking at just to understand what analysts and other investors are talking about when they bring up the holiday effect. Understanding the facts behind holiday stock trading will help you make a more informed decision before you jump on the theme yourself.

Historically, thanks to the Santa Claus Rally (the seven-trading-day period beginning after Christmas) the days before and after Christmas and New Year’s Day have been shown to be best for stock trading, especially tech stocks and small caps. The NASDAQ index of tech stocks and the Russell 2000 small-stocks index have averaged gains of 3.1% and 2.4% from three days before Christmas to three days after New Year’s Day since 1990.

Gains may be contributed to year-end “holiday spirit”, year-end bonus payments, and the end of tax-loss selling. It doesn’t hurt that these holidays fall in the ‘Best Six Months’ of the year (see the sell-in-May article linked above) and right in the middle of the best consecutive three-month span.

Less bullishness on last day before Christmas can be the result of last-minute portfolio restructuring. Pushing gains and losses into the next tax year often affects the New Year’s first trading day. Recently this selling pressure has continued into the New Year. 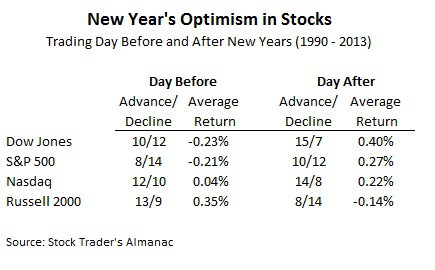 While looking at the historical data on the holiday effect, remember that outside events and news can always throw the patterns. The business cycle will also affect stock returns and is a much easier way to change your investing strategy.

Significant fourth-quarter rallies have a tendency to correct or consolidate in January. Over the years this trend has begun at different times in January. For example, in 2008 it started on day one, but in 2010, it began mid-month.

Regardless of the actual starting point, mid-month January weakness has had a negative impact on the most recent holiday to be formally observed by the NYSE, Martin Luther King, Jr. Day.

Recognition and observance of one of history’s most important civil rights leaders on the third Monday of January every year since 1998 can delay the start of option’s expiration week. A shortened trading week may also partly be responsible for the market’s poor performance on Tuesday, and frequently even worse trading action later in the week.

While the evidence shows that any particular year might be up or down before and after MLK Jr Day, stocks are typically up before the holiday and fall immediately after. Establishing a short position into strength on the Friday before this three-day weekend may have the best odds of a profitable outcome in the following week. 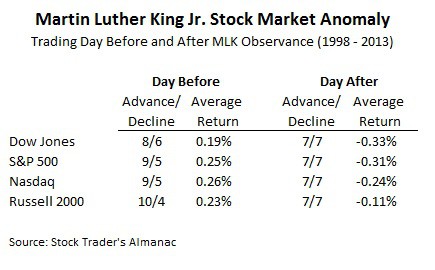 Bonds and other fixed-income investments are usually much less volatile around holidays and provide great protection against the uncertainty. Everyone should have some bond investments in their portfolio for when stocks play roller-coaster.

Presidents’ Day is the lone holiday that exhibits weakness the day before and after. Trading has turned more negative over the last twenty-two years. The Friday before this mid-winter three-day break is exceptionally bad, whereas the Tuesday after is not as brutal and has shown some improvement recently although average losses are greater.

The number of years the stock market has fallen before President’s Day has shown a strong holiday effect. While average losses after the holiday are similar to losses seen before the break, the consistency in number of up years and down years isn’t as strong. 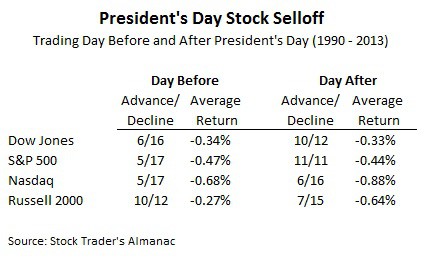 The Luck of the Irish for Stock Investors

Saint Patrick’s Day is the only recurring holiday in March. Good Friday and Easter land in March from time to time, but that has only happened twelve times in the last sixty-two years. Saint Patrick’s Day, however, occurs on the same day every year.

Although there is no official stock market closing or bank holiday, it is celebrated by millions (perhaps billions) of people every year, and includes festivities close to Wall Street. New York City has hosted an annual parade since 1762.

Holiday stock market gains on Saint Patrick’s Day, or the day after when it falls on the weekend, have been greater and much more consistent than the day before. Anticipation of the patron saint’s holiday and preparations for the parade down Fifth Avenue may cause equity markets to languish.

Perhaps the absence of those participating in the festivities drives the snakes out of Wall Street, leaving only the strongest professional hands to gather up the gold at the end of the rainbow. Or maybe it’s the fact that Saint Pat’s usually falls in Triple-Witching Week. 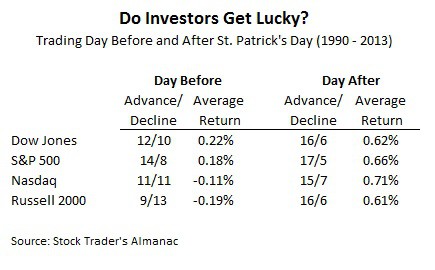 Good Friday Can be Great for Stocks

Good Friday is the one NYSE holiday with a clear positive bias before and negativity the day after. The holiday effect is strong and consistent before the holiday weekend though not quite as clear after. The day after Easter has the worst post-holiday record though average losses are steeper after Presidents’ Day. 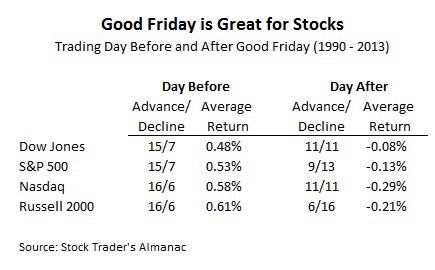 Memorial Day and the Stock Market

Congress voted to recognize Memorial Day with the National Holiday Act of 1971. Since then, it has had a weak bias ahead of the long weekend and strength after the holiday. Early departures for the first long “summer” weekend have driven the Dow down in three of the last four years.

Market performance the week after Memorial Day has been erratic, usually following the short-term trend of the market. 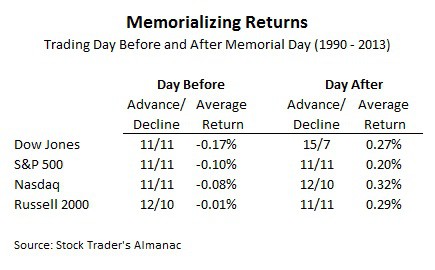 I almost didn’t even bother with the table for the holiday effect on Memorial Day. Looking at the data, it is a toss-up whether the stock market will be up or down in any given year. The average returns also do not provide a compelling reason to worry about the market.

It is important though to remember that Memorial Day marks the beginning of summer and an historically weak period for the stock market.

Trading on the day before and after the Independence Day holiday has often been lackluster. Volume tends to decline on either side of the holiday as vacations begin early and finish late.

There just isn’t much stock trading during the summer and the holiday effect provides no help. For the last three decades, the major indexes have recorded average losses the day before and after the July 4th weekend but losses haven’t been significant enough to merit some kind of portfolio protection.

The most compelling reason given for Independence Day stock market selling is that traders do not want to worry about headline risks over the weekend. They sell out of their stock positions so any bad news will not require them cutting the vacation short to address investor questions.

Labor Day weekend is another prime vacation time for traders and investors. Business activity ahead of the long weekend was more energetic in the old days. From 1950 through 1977 the three days before Labor Day pushed the Dow Jones Industrials higher in twenty-five of twenty-eight years.

Over the last several decades though, the holiday effect over the Labor Day weekend has been lackluster and inconclusive. While positive across-the-board gains on the day before and after are prevalent since 1990, the frequency of these gains is only slightly better than half the time.

It’s worth noting though that Labor Day typically markets the return to higher market activity after the summer lull. September isn’t quite in the best six months of the year for market gains but investors are coming back to stocks in anticipation.

If you sold stocks or bought options protection for the summer selloff, start thinking about getting back into the market after Labor Day.

For 35 years the combination of the Wednesday before Thanksgiving and the Friday after had a great track record. The stock market has been higher around 60% of the years before and after the Thanksgiving holiday.

While the market is consistently higher before the holiday, average gains have not been spectacular. The more volatile Nasdaq and Russell 2000 indexes have typically gained the most from the holiday. 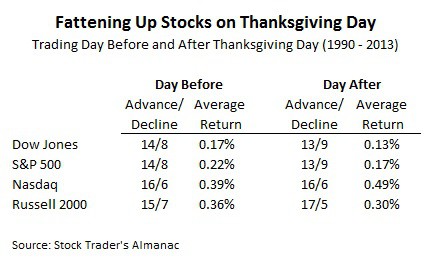 Don’t forget that all this trading in and out of stocks can really hit you at tax-time. If you hold an investment for less than a year, you’ll be taxed at higher rates with the rest of your income.

That is, unless you take advantage of tax breaks in retirement plans! Make sure you are maxing out your retirement contributions for some of the easiest money you’ll ever make in the stock market.

Summary of the Holiday Effect in Stocks

The Stock Trader’s Almanac has tracked holiday seasonality annually since the first edition in 1968. Stocks used to rise on the day before holidays and sell off the day after, but now each holiday moves to its own rhythm.

Before heading off for your next long weekend, remember this:

Like the other recurring stock market cycles there is an ebb and flow surrounding holiday trading. The holiday effect patterns are never exactly 100% the same. Outside events can knock them off kilter, and they change gradually over time with the shifts in human behavior and social traditions.