I don’t usually write about picking stocks but that doesn’t mean I don’t like to analyze individual investments to find companies with the potential to provide out-sized returns.

I was an equity analyst for nearly a decade, pouring over company financials and headlines.

What I found was that it wasn’t usually the news within each company to which you wanted to pay attention but the news outside the company, the news that affected the entire industry.

By following larger trends that affected entire sectors and industries, I was able to outperform my benchmark for money manager clients. Using a theme-investing approach meant I didn’t have to find the best stocks to buy but just the ones that would be driven by trillion-dollar transformations.

Investing is personal and I don’t want to recommend specific stocks because I don’t know your personal goals or needs. What I can do is to share some of the best technology stocks I have in my portfolio and my thinking behind buying each to help you use the process for your own portfolio. 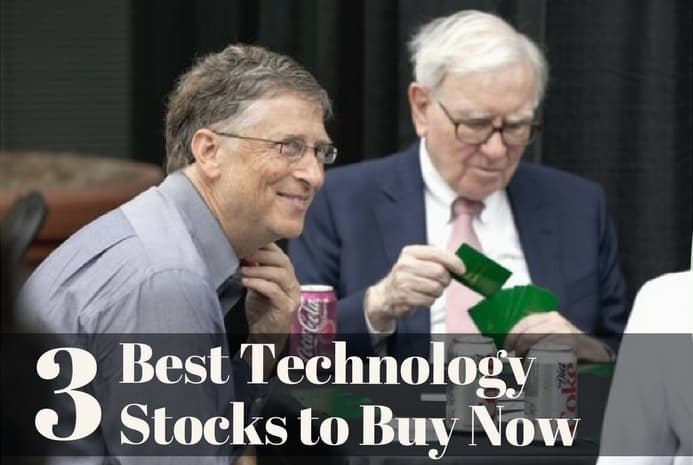 How to Pick Technology Stocks to Buy Now

The stock market is expensive right now and few sectors are as expensive as technology. The Technology Select Sector ETF (XLK), a fund holding 71 of the largest tech companies based in the U.S., has jumped 21% annually over the last five years and trades for 24-times earnings.

Tech stocks are generally more expensive than the overall stock market because the companies grow earnings faster but the bull market has left them especially pricey. It’s a problem for the overall market as well. Tech stocks make up 26% of the S&P 500 index. That means any hiccup in tech earnings or investor sentiment will not only crush the sector but will cause the overall market to tank as well.

But you can still pick strong long-term investments in tech without worrying that the next stock market crash will wipe you out. The best way to do this is to look for those longer-term global themes, the giant shifts that will transform our lives.

I call these, trillion-dollar themes because they’ll drive trillions in sales for the companies that can get a piece of the action.

Invest in companies that will benefit from these themes and you won’t have to worry about a stock market crash. The momentum from the theme will continue to drive earnings to companies and share prices will zoom higher.

Investing in these larger, longer-term themes also makes it easier to find profitable investments without having to pick the best tech stocks. The theme will support all the companies in an industry. Finding the best of breed stocks within the industry will mean maximum returns but any stocks within the group will do well.

Remember, investing is just as much about ‘how’ you invest as it is the stocks to buy. Make sure you invest with a low-cost online platform so you don’t lose all your gains to trading fees. I use Ally Invest because it offers some of the lowest fees in the industry as well as all the research and tools I need.

Open an account on Ally Invest for fees as low as $3.95 per trade

The primary driver for my first tech stock is online shopping but there are other factors including the rise of the gig economy that will drive earnings higher. As an independent worker, almost all my payments and expenses are made electronically. In fact, I get annoyed when a client wants to send me a physical check. What is this, the 90s?

Intuit estimates that freelance and independent workers are now more than a third of the U.S. economy and could be 43% by 2020. Globally, these digitally-paid workers bring in over $1.5 trillion annually.

And when you’re talking about online shopping and digital payments, one company dominates the conversation.

PayPal Holdings (PYPL) accounts for more than a quarter of all digital payments and grew payment volume 32% in the last quarter of 2017. The payment processor has signed deals with Visa, Mastercard and China’s Alibaba in the last year to expand its digital footprint and earnings are expected to grow more than 20% in 2018.

Shares of the tech company have recently been rocked by the announcement by eBay that it would be changing its featured payment processor away from PayPal. Shares of PayPal are off their highs by more than 14% but the news isn’t as bad as it appears. eBay only accounts for 13% of PayPal volume and users will still be able to pay with PayPal when they use the auction site.

PayPal will continue to dominate online payments and is now selling at a discount to its average price-to-earnings ratio. Shares trade for 39-times trailing earnings against a three-year average of 44-times earnings. That means, along with the increase in earnings expected, shares could rise 34% over the next year and even higher as the digital payments and online shopping theme plays out.

Get more information for PayPal on Ally Invest

My second pick for the best technology stocks to buy now isn’t really a tech company but it will benefit from one of the biggest tech transformations in a century.

Developments in self-driving technology are building daily but I was amazed to find out how close the tech is to practical adoption. While automation of cars is still a ways off, a self-driving semi-truck has already made the 2,400-mile trip coast-to-coast with the driver taking the wheel only rarely.

Uber’s self-driving startup Otto made its first delivery in 2016, a 120-mile delivery for Anheuser-Busch with the driver sitting in the cabin instead of behind the wheel. The technology is the first to reach ‘Level 4’ where no driver is required at any point.

Trucking companies employ 1.8 million drivers at a median wage over $41,000 a year. The International Transport Forum estimates that self-driving trucks will see widespread adoption before 2021 meaning much of that $74.3 million in driver wages could become profits for the companies.

Combined with costs savings in fuel, the advent of autonomous trucking could mean surging profits for the largest truck operators.

Old Dominion Freight Line (ODFL) is a leader in the long-haul, less-than-truckload (LTL) carriers and was able to maintain its rates through the 2008 downturn while maintaining on-time service. While the average driver salary is among the highest, the company is still able to maintain a best-in-class operating margin and trades relatively cheaply to peers.

Earnings are expected to increase 35% over the next four quarters to $5.95 per share on a 13% increase in sales with the company beating expectations in six of the last eight quarters.

Get more information for Old Dominion Freight on Ally Invest

Best Technology Stock to Buy for the Future of Banking

Online banking and crowd lending has been around for more than a decade but still has a long way to go. Online lenders account for less than a percent of the $3.8 trillion consumer credit market but are growing at double-digits annually.

The online banking and lending space is also one of the cheapest segments within tech because growth has yet to live up to the expectations set in the early days.

But that’s all about to change. Regulatory changes that relax how banks can operate is about to open up growth in the financials sector and that unstoppable shift online will spark an M&A boom in banking.

Lending Club (LC) is the leader in crowd lending and sells for a fraction of its 2014 IPO price. A series of problems at the p2p lender weakened the business in 2017 but it’s expected to quadruple earnings in 2018 and has a history of beating expectations.

Chinese billionaire Chen Tianqiao has increased his share of the company to over 15% including personal investments and those through Shanda Group. That is more than an investment and tells me he is planning something strategic for the company, maybe a move into the huge Chinese market.

Even with its 2017 problems, the company was able to grow revenue by 15% and is expected to grow sales by 20% this year. This could be the technology stock of the year and could be one of the best investments you make over the next several years.

Get more information for Lending Club on Ally Invest

Remember, it’s not about picking the best technology stocks to buy but about finding the biggest factors that are changing our world. Find those trillion-dollar investing themes and you can use that to pick the best stocks within a sector that will benefit. Even if you don’t pick the absolute best tech stocks within each industry, the whole sector will be supported by the larger theme and you can still book solid returns.