2017 was a great year for investors, the stock market jumped nearly 20% in its eighth year after the bottom of the recession.

Now in 2019, we’ve got some great tailwinds to even more stock market gains but there are also some themes you need to watch out for to avoid losing your money.

In my 2019 market outlook, I’ll cover five investing ideas and risks. Some good and some bad, but all things you need to watch for this year to make your money work for you.

I’m going to be adding a lot more great investing strategies to the YouTube channel this year including a weekly Q&A video to answer your questions about the stock market and reaching your investing goals.

I’m excited about reaching the community on a whole new level through these videos. Click through to subscribe to the channel so you don’t miss a single video.

As we head into 2019, the ninth year of the bull market, the stock market seems to be in outer space. There’s no gravity to stock prices. No matter how expensive stocks get, they just keep going up.

That doesn’t mean this year won’t be another good one for stock investors. I’m following some headlines and trends that could make 2019 the best year for stocks since the early rebound after the crash.

But it does mean you have to watch more closely for the risks. With stocks priced at about 25-times earnings, a point where the market has traded only twice as high before, any weakness or headline risk and investors could stampede to the exit.

That would send stocks crashing or at least lead to the correction most investment analysts have been predicting.

Tax Cuts Could Be the Biggest Investing Idea of the Year

First you’ve got the tax cuts becoming law in 2019. That’s great news for investors and sure to boost the market. Some market pundits believe that a lot of the benefit from the tax cuts is already ‘baked into' the market, meaning some of the returns last year were because investors were anticipating higher earnings from the tax cuts.

That's probably partially true but there is still a lot more coming for stocks.

You could see billions of overseas cash coming back to investors, companies will take advantage of the immediate deduction for capital spending and the lower rates will help companies with most of their business in the United States.

I'm watching a few industries that should be big beneficiaries of the tax cuts. Retailers, telecom, and trucking could all see stocks jump from multiple ways they win on the new tax reform.

All three industries are U.S.-focused so were paying high effective tax rates. Telecom and trucking will benefit from the ability to immediately deduct capital spending from income. Retailers should benefit from the boost to disposable income for consumers.

All three industries are also trading for discounts compared to the broader stock market.

I published another video specifically on picking stocks on the Trump tax cuts, which companies will benefit the most so be sure to check it out.

Winners and Losers from the Return of Inflation in 2019

Related to tax reform is the potential to finally get some wage inflation. Several companies have already come out with plans to boost wages or give workers bonuses. Eighteen states will also have their minimum wage increase in 2019.

Wage growth has been stagnant since the recession, growing at an average of just 2.2% since 2010 which is a percentage point lower than the 3.2% average before the stock market crash. If wages had been growing normally over the last seven years, the average hourly wage would be 10% higher. 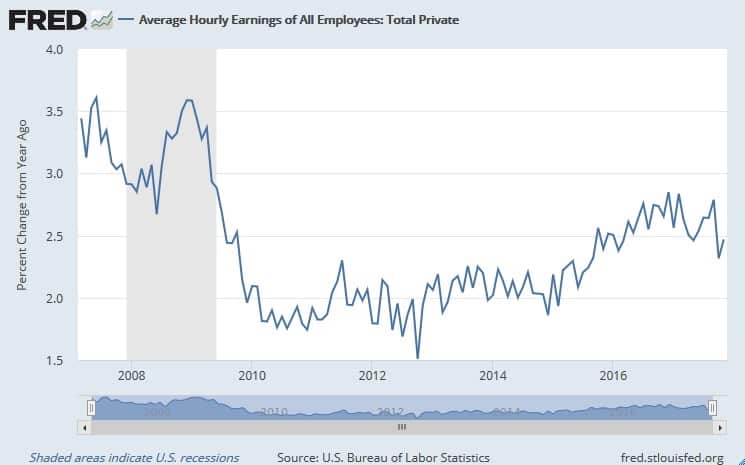 Now that increase in wages is a mixed bag though for investors and you have to look carefully at your portfolio.

Higher income for workers means higher consumer spending so that helps a lot of sectors, especially consumer discretionary and technology. An increase in inflation would also help the commodities producers like precious metals miners.

Companies with a labor-intensive business models though would see higher wage costs and maybe lower profits. I’m thinking of industries like retail and hospitality here. Now the benefits from the tax reform might be enough to still boost profits but look for warning signs towards the end of the year if wages start climbing.

China Could Be a Big 2019 Market Risk

President Trump campaigned on a hard-line against the $337 billion trade deficit with China but largely held off on promises to call the country out in 2017. The reasoning was that President Xi was helping to cool the North Korea situation but that really hasn’t gone anywhere and the U.S. is pushing more sanctions on its own. 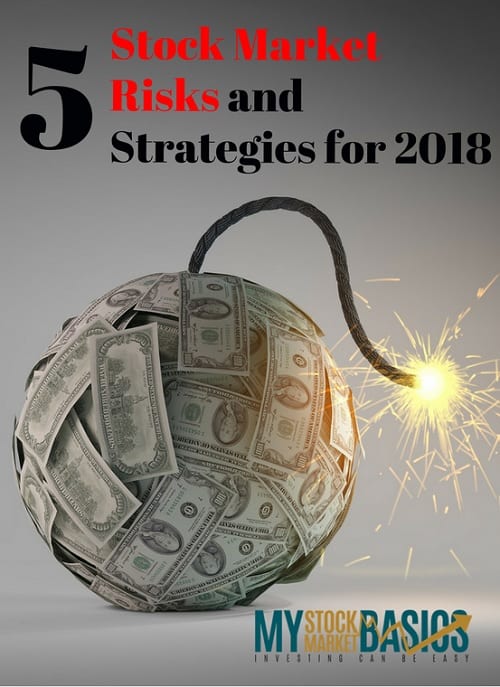 That means the Administration may come down harder on China in 2019 and could have huge consequences for business and the markets.

It would be hard to just slap a tax on Chinese imports without much justification so Trump has ordered a few investigations into Chinese steel-making and intellectual property theft. The results of these ‘investigations’ could easily be used to rationalize targeted tariffs against some Chinese industries.

Of course, China imported nearly $200 billion from the U.S. last year and some of those imports would likely see taxes imposed if the U.S. made a move.

Import taxes would likely get passed on to consumers so prices would go up for some things made in China and shipped to the U.S.

The biggest export from the U.S. to china is aircraft so companies like Boeing would definitely take a hit. U.S. steel producers will likely benefit though steel users like car manufacturers would lose out on higher prices. The general investor sentiment would surely take a hit which would be the bigger problem and could drive stocks down sharply.

Even without China, Trade Could Mean a 2019 Stock Market Crash

Also on the trade theme, NAFTA renegotiation talks have gone nowhere and could be even more important than the China theme. Canada and Mexico are our largest trading partners with a combined trade of over $1.1 trillion.

The negotiations have been pushed into 2019 but there’s good reason to believe they’ll break down and NAFTA could be scrapped. The Mexican presidential election in July and U.S. mid-terms means both sides will need to talk tough to save face in front of voters. Also in July, legislation expires that gives Trump more authority to negotiate trade deals.

A repeal of NAFTA would be a huge hit to investor sentiment and prices would jump for a lot of products. Trade would decline which would hit the economy. Automotive and apparel companies could be hit especially hard.

Politics as Usual Could Change Stock Winners this Year

The final risk to investors in 2019 is around the mid-term elections. There is a very good chance that the Democrats will retake the House though the Republicans may be able to keep control of the Senate. This would deadlock Congress and very little would probably get done until 2020.

That’s not necessarily a bad thing but it will mean different things for some sectors and industries. Healthcare could get a boost on hopes that the Democrats will negotiate some fix to Obamacare. Companies in defense like Lockheed Martin could take a hit on fears that Democrats will demand a balance between defense spending and other programs.

So those are the five biggest risks in the 2019 market outlook. Some will support the market while others could crush it. You don't have to completely change-up your portfolio on these market risks but keep an eye on them. At minimum, you may want to rebalance your portfolio after nearly nine years of soaring stock prices.